In early July the OKDIA Secretary and the Chairman of the Technical Committee met with World Sailing technical staff in London to discuss the current class rule proposals and several other matters regarding class rules and wider class matters. The current proposals were approved in principle, giving us the confidence to take them into the AGM.

World Sailing were also impressed with the standard of technical competence within the class. As the class conInues its recent growth it is important that we maintain this level.

A few days later and the day before the 2018 AGM in Warnemunde, a meeIng of the Technical Committee was held to discuss the proposals and a few new suggesIons. Measurers and manufacturers were also invited. The discussions went well and a couple of amendments were made to the proposals for the AGM. These amendments can be found in the AGM minutes. The minutes of the TC meeIng can be found below.

The AGM was run is such a way that any proposals that were not going to pass were not voted on. All of the proposals except No 1 on CerIficaIon were voted on and passed. The indicaIon from the meeIng was that the TC should go back and take another look at the purpose and intent of this proposal.

The proposal 9 in the 2018 AGM agenda was discussed with the vast majority being in favour of opIon B. The feeling of the meeIng was that opIon A would leave too much scope for the “look” of the boat to be altered.

The meeIng then discussed cockpit liners. JS was concerned that the introducIon of a rule to allow liners would (1) produce more weight concentrated boats, especially around the
centerboard case capping, and (2) would make it more difficult for home builders to make compeIIve boats. Also that boats should be able to be measured to the current rules. AS, CT and RD (regarding the Synergy moldings) pointed out that current cockpit liners weigh much less that two plywood bulkheads and that providing the details in the proposal were adhered to we would not see heavy liners being used. The 70mm for the outside flange was chosen as this allows floor mats to fill the enIre area inside the flange thus making a better looking product.

The meeIng did not have any objecIon to this as it was unlikely a three-piece mast could be made faster than a two or one piece. The only issue would be interchangeable secIons and so event marks needed to ensure that masts stayed together during an event.

There was a discussion about including the pin/bolt in the weight of the mast. This was intended to stop the progression to ever more expensive and lighter bolts. The meeIng rejected the idea.

The new rules do not specify any limitaIon on the types of coverings that are allowed, as they do for spars and hull appendages. The meeIng agreed that they should be limited to paint, varnish, gelcoat, resin and vinyl. Also that the TC should monitor new products

Several years ago AD asked all the builders for their building measurements in items such as deck height and pintle distance. As a result, some builders changed their molds and most deck heights at the mast are now 465-470mm. It was decided not to look to introduce a standard mast length at this stage but to publish all the available data with a set of recommended numbers for manufacturers to build to.

1. Weighing hull with centerboard. Would only work with engraved cerIficaIon numbers and a maximum weight. Idea rejected.
2. VerIcal Rudder. JS said the Danes were keen to look at this. JS will make a prototype and do some tesIng.

InterpretaIons of the padding rules have caused much confusion in recent years as builders seek to allow their customers to hike higher and further out. Ader some discussion it was agreed to modify the current proposal to specify that padding on the gunwale must fit within a box of 10mm verIcally by 35mm horizontally, on top of the 35mm x 35mm exisIng box. This allows padding on the sheerline to be lower than padding on the gunwale providing both are no more than 10mm above the sheerline. AD to arrange for a new drawing to be made with the padding box rule included.

After a long time and very hard work, the Class Rules are now re-written in accordance with the ERS (Equipment Rules of Sailing) which should clear up a lot of grey areas in the Class Rules while keeping the spirit and basic measurements of the boats the same.

The new Class Rules should always be downloaded from the World Sailing website, as that are the ones in effect at the time.

This certificate shall be used by national associations which allow for personal sail numbers. Please download the PDF and print for use.

The General Committee (GC), with the approval of the Technical Committee (TC) and the International Measurers (IM) has taken the decision to temporarily remove metal from the list of allowed construction materials for the centre-board. This change only applies to new builds and will not affect existing boats with metal boards.
END_OF_DOCUMENT_TOKEN_TO_BE_REPLACED

In November 2014 OKDIA introduced new rules to control the construction of masts and to try and slow down the progression towards more expensive materials and methods being used. This resulted in a Licensing Agreement that all mast manufacturers must now sign.

Detail of how to become an OKDIA certified mast builder

The label proves to the owner, measurer other sailors that the mast was built or repaired by a licensed builder.
The cost per label is £10 including shipping and should be applied by the builder.   Orders should be sent to publicity@okdia.org

OK Dinghy sails built after Dec 31 2015 are required to have an official OKDIA Sail Label. Sail labels shall be purchased and attached by the sail maker and shall be attached near the tack and shall be sown across.

The measurer should signed and date the sail across the label. The label itself is not proof of measurement.
Orders should be sent to publicity@okdia.org
The cost per label is £10 including shipping.
The Class Rules change is on the World Sailing website here: http://www.sailing.org/classesandequipment/20283.php 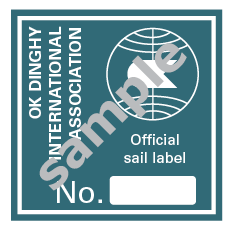 OK Dinghy sails built after Dec 31 2015 are required to have an official OKDIA Sail Label attached near the tack.These are to be purchased and attached by the sail-maker, and should be signed and dated by the measurer.
Orders should be sent to publicity@okdia.org
The cost per label is £10 including shipping.
The Class Rules change is on the World Sailing website here: http://www.sailing.org/classesandequipment/20283.php

Mast manufacturers have to sign a letter of compliance with OKDIA to become a certified mast builder.
All masts built have to have a mast label on them.
The cost per label is £10 including shipping.
this rule is in effect since 1. November 2014

Please open/download the PDF below for the full text of the statement.

As some of you will be aware there are tests going on in Hellerup, Denmark concerned with swing testing OK Dinghies to =ind out if and how big any differences are in weight distribution. To date, this group has swung 10 boats with boards in. Their conclusion was that there are large differences between the boats and they are keen to pursue this further. This research is to be commended.

The Technical Committee’s role is to research options and give advice, so any further action in regards of any possible rule changes has to come from the broader membership of the class.

Statement from the Technical Committee regarding Swing testing of OK Dinghies (PDF, 79 KB)

This statement from OKDIA is designed to clarify the processes and responsibilities of the various parties involved in equipment inspection at a World Championship. This statement will not go into detail of what happened in Melbourne – that is published here – suffice to say that OKDIA supports all actions taken by the Chief Measurer and the International Jury.

As it is very hard to test which material was used in the construction of plastic masts, OKDIA opted for a licence model.
The Class Rules are: